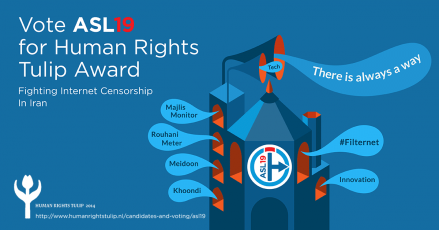 We are excited to announce that ASL19 has been shortlisted for the prestigious annual Human Rights Tulip Award given out by Netherlands’ Ministry of Foreign Affairs. Among the awards’ 30 shortlisted candidates, ASL19 is the only nominee focused on enabling access to human rights in cyberspace through a combination of technology tools and research, often conducted in collaboration with university researchers.

The award honors individuals and organizations promoting and supporting human rights in innovative ways. Public voting ends this Friday, October 10 at 5:59pm EST, with the top 3 finalists headed to the jury. ASL19 was chosen for its work helping Iranians navigate the dangerous world of online surveillance and Internet censorship through a unique combination of technology tools, research and online resources.

ASL19’s tools have been used by 1.3 million users, protecting their identity when they publish on social media and helping them access banned sites such as BBC Farsi and VOA. Earlier this year, eight Iranians were sentenced to a total of 127 years in prison for criticizing the government on Facebook. Iran is also among the worst jailers of journalists according to the Committee to Protect Journalists.

Although access is blocked, millions of Iranians manage to bypass Internet censorship using illegal virtual private networks (VPNs) and other circumvention technologies, such as Psiphon. The shortlist comes just weeks after the publication of a study that found nearly 70% of 23.5 million Iranian Internet youth users use circumvention software.

Cyberspace has become a critical battleground for power in autocratic countries, where governments are fast learning how to control the flow of information and online civil liberties to silence dissent. “Information is power, so when a government or anyone else withholds information that could help citizens make informed decisions about their future, this is often an indicator of weak government transparency and accountability,” said ASL19 Co-Director Ali Karimzadeh Bangi.

If awarded the €100.000 cash prize, ASL19 plans to expand its work to the broader Middle East region. To support our work, please cast your vote here. Voting ends this Friday, October 10, 5:59pm EST.