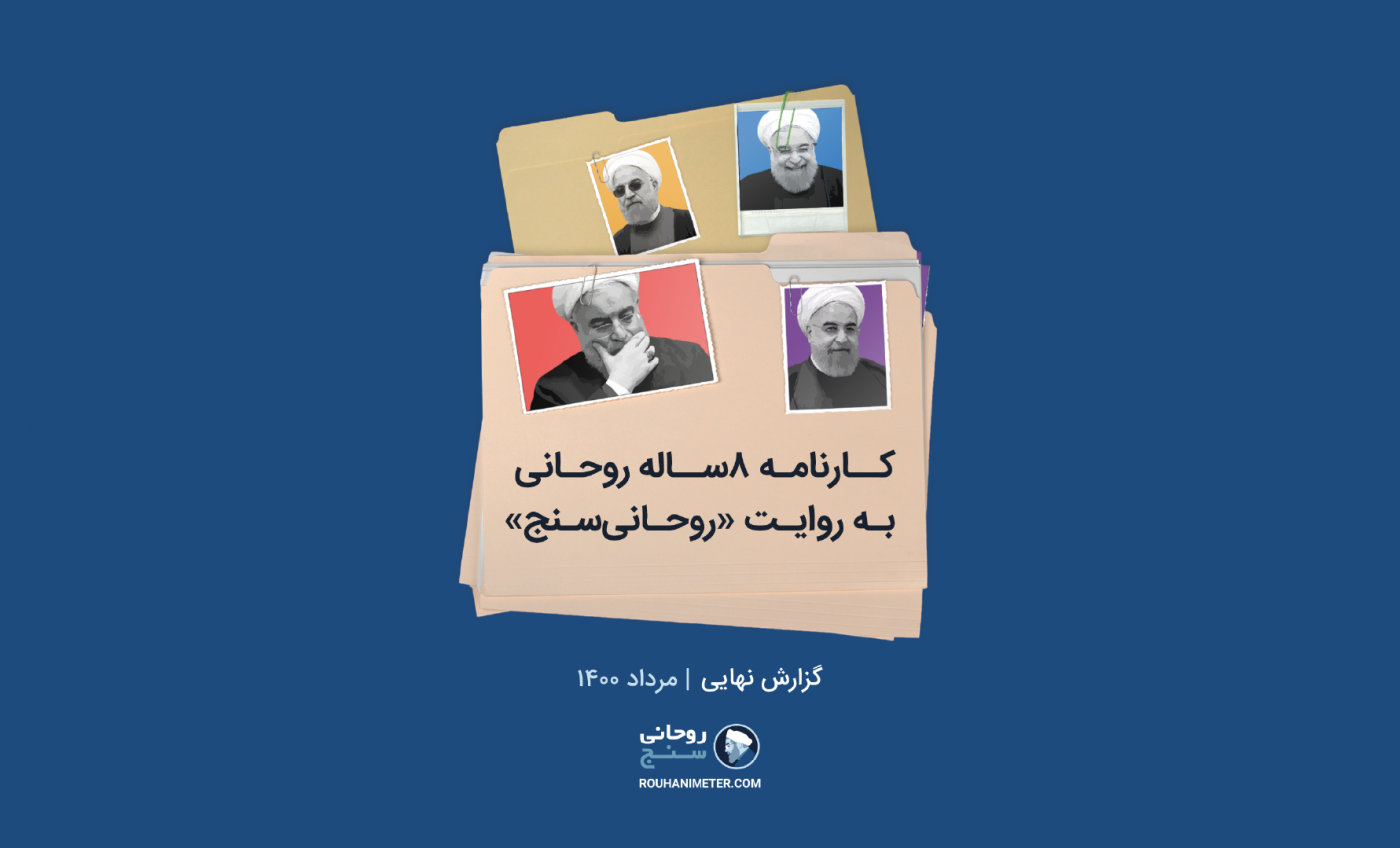 Eight Years and 100 Promises: The final chapter of Rouhani Meter

Eight years ago, Rouhani Meter became the first to introduce promise-tracking and structured journalism into Persian-language online media. While the project came to an end as Hassan Rouhani handed over the presidency after his second term, the promise-tracking efforts and results continue to shape what government accountability could look like in Iran.

In a Final Report (Persian), we provided an overview of the Rouhani administration’s successes and failures in achieving the 100 promises made — 80% of which ended up unfulfilled — and a detailed analysis on the trends we observed over the years.

Inspired by the MorsiMeter in Egypt, Rouhani Meter was created based on the former president’s victorious 2013 election campaign, which was adorned with many promises to improve the country’s economy, resolve diplomatic crises and guarantee social and political freedoms.

At the time, promise-tracking was still a relatively new practice. Rouhani Meter not only introduced promise-tracking to the Iranian media, it was a significant attempt to hold Iranian elected officials accountable through fact-based, structured journalism that is easily accessible to the public. Despite the government’s blocking of the website less than a month after its launch, Rouhani Meter maintained a growing audience, as both the former president’s supporters and skeptics were keen to monitor his progress.

The project aimed to support greater civic engagement and decision-making by providing easy access to information and timely updates on the promise tracker. The editorial team put particular emphasis on journalists’ independence, impartiality, and ability to draw informed conclusions from the data available. It is essential to conduct fact-based assessments free from personal political ideology or influence of public sentiments.

At the end of his presidency, Hassan Rouhani failed to achieve 80% of his promises. Out of a total of 100 promises selected from his two election campaigns, 72 were rated “Not Achieved,” while eight promises that were removed from the government plans were rated “Stalled”. Among the remaining 20 promises, 12 were rated “Compromised” where what was achieved was less than what had been promised, and only eight promises were marked as “Achieved” at the end.

Looking at the pattern of his successes, we found that the eight achieved promises were mainly short-term goals that were accomplished in the first few months of Rouhani’s presidency in 2013. This includes reviving and reopening institutions, such as the Bureau of Political Parties, Film Academy, symphony orchestras and some publishers that were closed down or dissolved during the presidency of Mahmoud Ahmadinejad.

Still, the record of his first term as well as the relative stability in Iran’s economy and the easing of foreign policy crisis after the 2015 Iran Nuclear Deal (JCPOA) seemed promising to many. Rouhani won the re-election in 2017 and more promises were added to the Meter. While some expected more progress in his second term, the promise tracker started to show a different story and even his previous accomplishments were soon overshadowed by the wake of new economic, political, and social crises. Although Rouhani’s failures to keep the promises were compounded by many other factors, including domestic political standoffs, the US’ withdrawal from the JCPOA, and the COVID-19 epidemic, the Meter stays truthful by reflecting the situation in our reporting.

What’s the next step

As of 2021, economic indicators are at their worst. Iran is experiencing the biggest stagflation in recent history. And the graveness of the country’s foreign policy crisis and diplomatic isolation has reached a new level as sanctions tighten and tensions rise between Iran, major foreign powers and other countries in the region. Public discontent with the government continues to rise as we saw some of the most violent crackdown on protests in January 2018, November 2019 and July 2021.

As experienced by other promise trackers, disillusionment with the government combined with the loss of faith in democratic due processes leads to a decline in interest and engagement on promise tracking platforms.

With the beginning of Ebrahim Raisi’s term, we decided that identifying and countering the rising trends of misinformation serve a greater purpose in increasing government transparency and accountability. While expanding on our existing fact-checking work on Factnameh, we will continue to monitor government statements, elected officials, public figures and the media to hold powerful institutions and individuals accountable.

Although that means ASL19 will not create a “Raisi Meter” for the new administration, we believe the Rouhani Meter will serve as the cornerstone for more accountability and transparency projects in Iran and will continue to inspire many other Meters around the world.