Technology companies which continue to deny access to their services to Iranians, despite being legally allowed to do so, represent a serious threat to free expression. Overcompliance is the term that describes exaggerated adherence to sanctions laws, and occurs because of fear of the legal ramifications of sanctions noncompliance.

Despite ongoing attempts by civil society groups to increase awareness of the terms of the sanctions on Iran, exaggerated adherence to sanctions laws continues to occur.

This trend is the shared result of vague provisions coupled with harsh penalties. For companies and their lawyers, the ‘counsel of caution’ can lead them to over-comply: they choose to avoid potential financial consequences and eliminate risk by choosing not to provide services or do business with Iranians. In the end, who loses due to overcompliance? While the companies deliberately choose to forgo profit, those who lose most are the users who are denied these services – the people of Iran.

The 2014 General License D-1 released by the United States Treasury exempted many services from sanctions. However, many companies continue with their prevailing approach and have failed to (re-)introduce these services in Iran. Specifically, Iranians should not be barred access to both fee-based and no-cost publicly available services “incident to the exchange of personal communications over the Internet,” and software necessary to enable such communications.

In fact, overcompliance can have serious human rights repercussions. In a society where access to online information is controlled by the authorities and publications are routinely subject to censorship, access to online services is already restricted. Overcompliance with sanctions laws serves to heighten the obstacles Iranians already face. The generalization and oversimplification of sanctions laws leads to a widespread denial of service that is as unjust as it is unwarranted. According to Collin Anderson, a researcher on Iranian Internet policy, “both the human rights community and policy makers have long understood that greater access to information technology empowers the public to bypass governmental controls on expression.” Ironically, the very sanctions designed to provoke political change in Iran may do just the opposite by disempowering Iranian citizens.

Additionally, companies that over-comply with sanctions laws risk setting a precedent that other companies may follow. This entrenches a normative behaviour in which companies resist providing services to Iranians.

Take the case of an Iranian LinkedIn user who was blocked from accessing the free site, and was told that he would have to pay to use the service. He received the following message: “Sorry… Due to US government restrictions we are unable to offer paid products and related free trials in your location.” Effectively, LinkedIn would only extend service to Iranians if it were paid for by users – a practice not required of users in other countries. LinkedIn’s overcompliance with sanctions essentially creates an additional barrier to Iranians’ access to information. (LinkedIn later apologized and clarified their statement.) 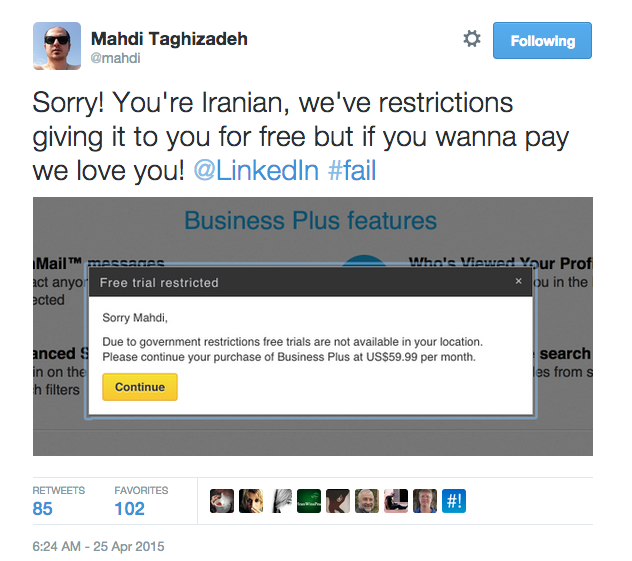 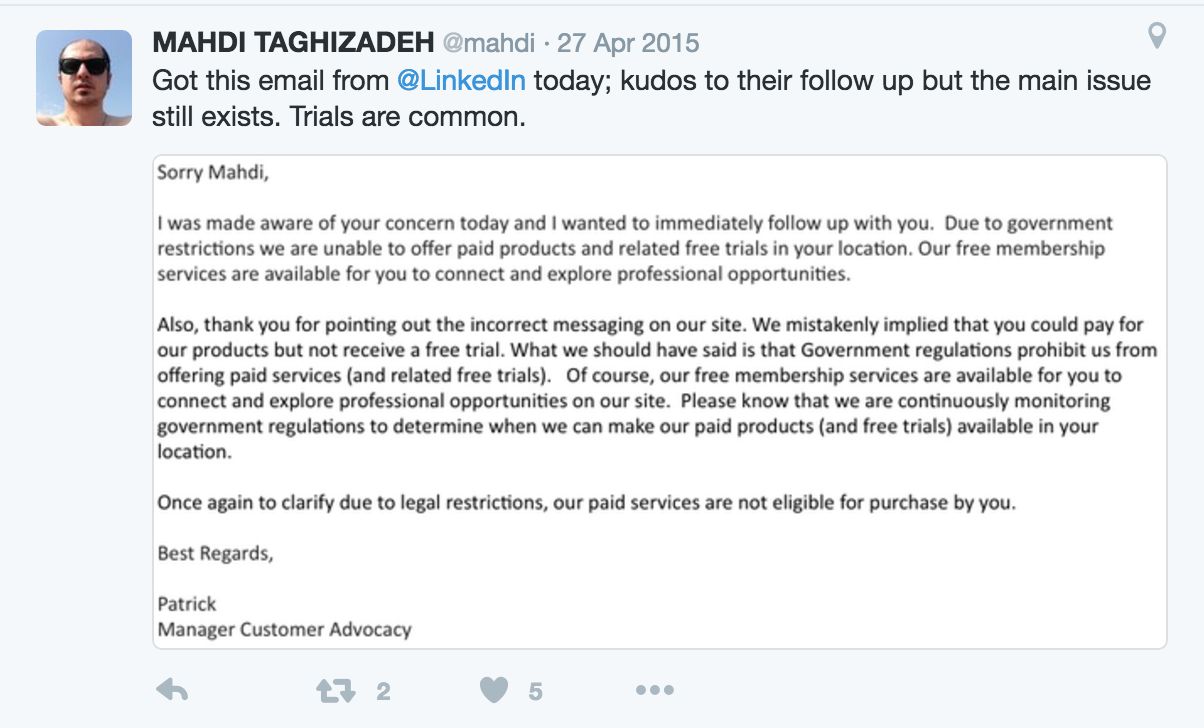 In another case of unwarranted overgeneralization, PayPal users were blocked from purchasing the architectural book “Iranian Living Rooms.” Orders weren’t permitted since the book had “Iran” in the title – despite the fact that it was authored by the Italian design company Fabrica. PayPal later conceded that it had acted on “misguided efforts to follow regulations by the Treasury Department” – a clear case of overcompliance.

Despite these concerning cases, the future looks promising. Just last summer, both Google and Apple unblocked their app stores in Iran. Given the severe penalties for sanctions violations, misinformation and fear of legal repercussions are some of the factors that have contributed to overcompliance, which are being remedied through efforts at dialogue and clarification. Iran and US also made a historic deal, which lifted nuclear related secondary sanctions on Iran. As a result, European companies can now provide their services to Iranians.

The US Department of Treasury also issued General Licence H, “Authorizing Certain Transactions Relating to Foreign Entities Owned or Controlled by a United States Person.” Although US companies must still adhere to the remaining US sanctions against Iran, there are now more opportunities and also more possibilities for further openings in the near future. Given the recent Iran deal, perhaps the US Government could also consider issuing a new General Licence as a goodwill gesture.

The Deal presents an opportunity for the private sector and civil society to work together to support Iranians in enjoying their rights to free expression and access to information online. With these positive developments, we hope that the worst years of the technology-related sanctions on Iran have passed. Let’s make this opening count.

ASL19 is organizing a panel on the Iran Deal and the Future of Tech Sanctions at RightsCon Silicon Valley on Wednesday, March 30. Join us at 2:30 p.m. PDT for the livestream on RightsCon's website.