As part of the RightsCon conference held in San Fransisco this year, ASL19 organized a workshop on the first day titled “Bridging the Gap Between Circumvention Tool Developers and Civil Society.” The workshop featured representatives from respected companies in the circumvention world – including Psiphon, Hotspot Shield, Alkasir, Lantern, uProxy, OONI, and Tor. Civil society was also well-represented, with friends from Radio Zamaneh, Cyber Arabs, and the Gulf Centre for Human Rights, among others. Overall, the session drew an audience of more than 50 people.

The goals of the workshop were to relay users’ issues to developers and to start a dialogue between developers themselves. The organizers and moderators of the session – Sina and Amin – reached out directly to both users and developers to identify the issues that made it to the agenda. They ran a survey on social media channels asking users questions about their experiences with different tools, and sent out a questionnaire for developers. (A presentation about the results can be found here.) While the surveys were very informal, the results provided valuable and interesting information.

By skimming through user questions and comments from the survey, we came up with topics and questions for developers. We asked about the value of localization and customized outreach; funding and sustainability problems; and scalability and feasibility; all the while focussing on user support. We received answers from some developers, and when comparing them we found that they face similar challenges. On the other end, we organized a survey for our users in Farsi and Arabic asking them about their experiences with circumvention tools, what could be improved, and the price they are willing to pay for a good VPN service. We then distributed the survey using our social media channels and civil society networks. 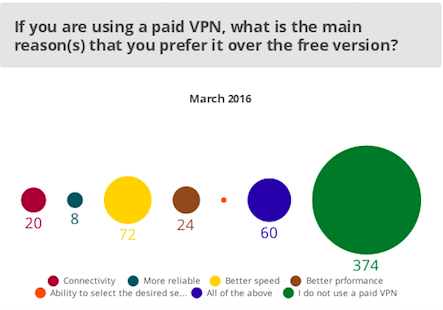 Despite starting out slow, the discussion picked up steam after tool developers disagreed about the importance of localization and customization in outreach. A Tor representative noted that having localization initiatives – such as a localization lab and other open source initiatives – is sufficient outreach. The representative from Alkasir responded with his own experience, and explained how Chinese users of his tool took matters into their own hands to create a guidebook to help fix some technical problems.

“We need to do more development work to integrate continuous deployment of translations. We (and everyone) lack broad knowledge of regional idiosyncrasies, such as what certain colours mean in various countries, which iconography works and what doesn’t, UI placement variations, etc.” (Tool Developer)

Talking about localization and outreach led smoothly into a discussion about scalability and feasibility.

More than 50% of Arabic users surveyed said that the main problems with using a circumvention tool are: the lack of support in their language and slow user support response. (ASL19 Arabic Survey, 2016)

Questions such as “how do you handle growing user numbers that require support in different languages” were posed to different developers. Comments from our users highlighted that a big part of using a circumvention tool is trust; and indeed what followed was a discussion between Psiphon and Hotspot Shield about privacy and information handling. The discussion ended with an agreement that all developers and circumvention tool companies present saw protecting user privacy as a priority.

Related to this topic were the challenges facing circumvention tools in times of blocking and service disruptions. Most developers present hoped to find a way to share experiences instead of battling individually. To illustrate, the representative from Hotspot Shield pointed out the challenge they face in just-in-time information control, and how local user groups can solve such issues. OONI also weighed in to talk about the need to have accurate network measurements, such as censorship reports.

The discussion then progressed to funding and sustainability – a major recurring topic in our research:

66.2% of Iranian users and 46.8% of Arab users said that they will not pay for a circumvention tool service.

More than 50% of Arabic users surveyed said that the main problems with using a circumvention tool are: the lack of support in their language and slow user support response.

Developers discussed the different methods of generating and raising money. With funding becoming more and more difficult to find, some are looking for a more sustainable model. Moreover, with our users expressing their opposition to paid circumvention tools, companies are pushed to be more creative in finding ways to generate income. They want to do so in a way that won’t affect performance, leading to slower internet speeds.